Application to extend opening hours from 23:00 to 05:00, and to add delivery and collection services.

Ecco Pizza is a restaurant & takeaway on Drury Lane, situated just North of the junction with Stukely Street on the stretch between Shorts Gardens and High Holborn, below and adjacent to residential flats.

They currently have a licence to serve alcohol until 23:00 to up to 40 people (despite their sign showing over 70 seats in the picture below and despite reports of problems caused by them often staying open later, illegally).  The licence also has conditions that all alcohol sales must be ancillary to food, for consumption on the premises only, and served by waiter/waitress service to people taking a table meal.  These are often referred to as ‘Restaurant Conditions’.  They are not allowed to sell alcohol for takeaway at any time, and not allowed to sell hot food after 23:00 for takeaway or for eat in.

Their planning permission is more restrictive.  After Camden refused them permission to change a shop into a restaurant in 2011, they partly won an appeal which allowed them restaurant use but, because of the sensitive location, they were only allowed to operate 07:00hrs 20:00 Monday to Saturday and 08:00 to 17:00 on Sundays & Bank Holidays.  So they should shut at these earlier times.

They also want to be allowed to sell food and drink for customers to collect, and for sale by delivery services (eg: Deliveroo). 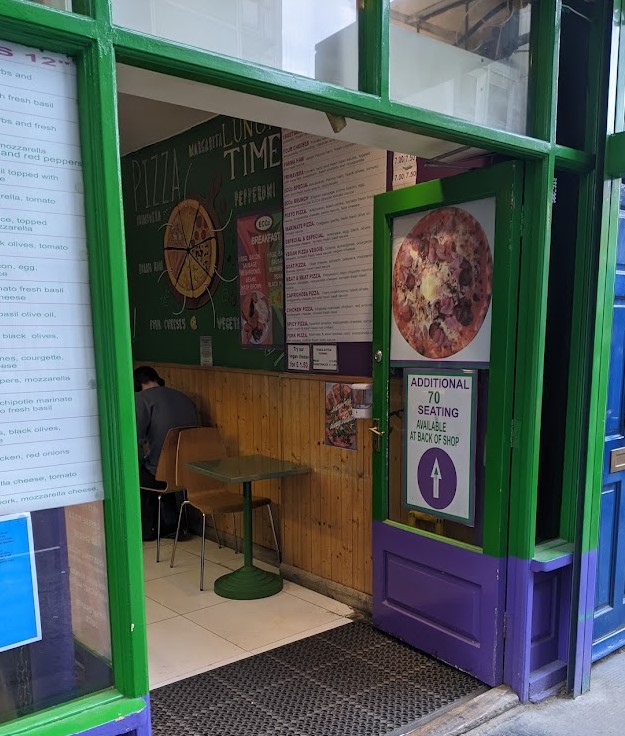 Because customers can order ahead and collect, this would effectively turn the restaurant into a late night takeaway.  These are, unfortunately, known to generate problems of noise, anti-social behaviour and violence in the West End because they are where people go and get food after leaving pubs, bars and clubs.  These people are already often drunk, and the fact that these premises encourage them to gather together increases noise, ASB and the risk of crime and disorder.  This is the case whether people are allowed to eat in or take food away.  They therefore generate many of the same issues as late night bars.

Local residents have expressed significant concerns about this application.  Even if there were no takeaway element, this would be the only restaurant operating until the early hours of the morning in the whole Covent Garden area.  It would be likely to draw people from late night venues some distance away, looking for something to eat before going home.  This would bring large numbers of people to a part of Drury Lane which is currently relatively quiet at night.  This is likely to result in noise, litter and a host of other issues.

Residents further away, in Seven Dials and St. Giles, are also concerned that people will drift into highly residential spots nearby to sit and eat etc. in the middle of the night.

Even if these premises agreed to close earlier, but at any time after the pubs close, it would still be likely to cause the same problems by attracting people when they leave the pubs.

The addition of delivery services is likely to cause pavement obstruction from bikes and from riders loading up.  The premises already leave their refuse sacks out in a way that causes obstruction.

The use of extraction systems all night is an additional worry.  The extraction system has caused issued for neighbours since the day it was installed – initially without planning consent either.

You will need to form your own view on the application.  If you are concerned, either because of the impact in the immediate vicinity or on the wider area, then you need to object by making a ‘Representation’ before the deadline of Midnight on Friday 29/04/22.  This is best done via Camden’s Licensing Register at this link.  (Instructions: insert application number APP\PREMISES-VARY\109517 in the search bar then, at the top of the list, click on the application number.  This opens the application’s page, with the details and documents.  At the bottom there is a link to ‘Make a representation form’.  This takes you to a form which asks your reasons for objecting.  You can write directly into the form or add an attachment to it.  We recommend preparing your Representation as a text document and then adding it as an attachment.  This preserves formatting and so makes it easier to read and refer to at hearings.)  Please email us or leave a phone message if you have difficulty in doing this.  You can also email the address licensing.representations@camden.gov.uk, but this is less reliable as it isn’t always monitored (although we have asked Camden to make sure they check it).

In support of local residents, the CGCA intends to object to the application on the grounds that only a standard restaurant operation is appropriate in this location late in the evening.  In our view they need to close, at the latest, no later than the ‘Framework Hours’ that the council often grants for restaurants, and that most pubs have (Midnight Friday & Saturday, 11.30pm Monday to Thursday, 10.30pm Sunday).  And they should operate no takeaway after 11pm in such a quiet, residential area.  However, if you have a different view please let us know.

If you have any questions please contact the CGCA’s Licensing Sub-Committee at licensing@coventgarden.org.uk.