The application for these premises to operate after 11pm (until 4.30am on Friday and Saturday nights and 2.30am the rest of the time) was rejected by Camden council’s Licensing Panel B after a long evening session.

There had been about 50 objections, including from our local councillors, so the community consensus was clear to the panel.  The police had also objected, and despite coming under fire from the applicant’s lawyer, held their ground at the hearing – pointing out, with data, that late-night refreshment venues keep people in the area longer and therefore contribute to increased opportunities for crime and are, unfortunately, hot-spots for it.

CGCA’s main case was that bringing people into this relatively quiet part of Shaftesbury Avenue, after bars close in busier spots, leads to an increase in public nuisance.  This nuisance has an impact not just on those living nearby, but also further afield because of where people go to eat takeaways, leave their litter and do worse.  Anyone with a doorstep in Seven Dials knows this.

The applicant’s lawyer repeated angrily that residents had created a “stronghold” where no late-night venues were operating after Framework hours.  He said that, as a result things, were rather quiet at night and that this was not reasonable in the West End.  The structure of a licensing hearing does not allow us to cross-examine and shred such crass opposition, but the CGCA team certainly felt like doing so.

He was in fact wrong about no venues operating in the area after Framework hours (Midnight at the weekend etc.), and sadly we have some that do cause problems.  But we are happy that he recognised that the local community generally does a good job of coming together to present the case for the area to remain liveable and fun for us, as well as for our businesses’ customers.

“Stronghold” has a nice ring to it, actually.

You can watch a recording of the licensing hearing at this link.

Angels, the theatrical costume hire shop, moved out of Shaftesbury Avenue last year after 180 years in London’s West End.  The ground floor and basement of the building at 119 Shaftesbury Avenue has now been turned into ‘German Doner Kebab’.  You can see the location here and a picture is below. 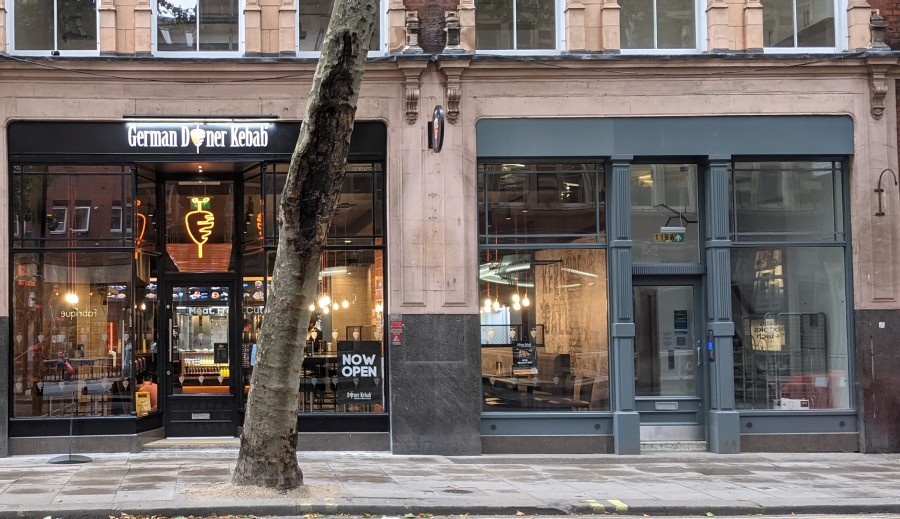 They have now applied for a Late Night Refreshment Licence, which they need if they serve hot food/drink after 23:00.  The hours they are applying to operate are until 02:30 in the morning on Sunday to Thursday nights, and for most of the night until 04:30 in the morning on Friday and Saturday nights.  They would stop serving 30 minutes earlier but allow people to stay to finish eating.

Late Night Refreshment premises are, unfortunately, known to generate problems of noise, anti-social behaviour and violence in the West End because they are where people go and get food after leaving pubs, bars and clubs.  These people are already often drunk, and the fact that these premises encourage them to gather together increases noise, ASB and the risk of crime and disorder.  This is the case whether people are allowed to eat in or take food away.  They therefore generate many of the same issues as late night bars, even though they do not serve alcohol.

Local residents have expressed significant concerns about this application.  There are a number of other late night takeaway/eat-in premises establishments in the area already (Wingstop, Shakeshack, McDonald’s) but these all have much earlier closing times:

If this branch of the ‘German Doner Kebab’ chain is allowed to trade later than any of their neighbours then we believe that they will attract people from Soho looking for something to eat before going home.  This will bring large numbers of people to a part of Shaftesbury Avenue which is currently relatively quiet compared to Cambridge Circus.  This is likely to result in noise, litter and a host of other issues.  Street urination is also a worry as the premises has 90 seats and substantial takeaway provision, but only 3 WC’s.

Residents frther away, in Seven Dials and St. Giles, are also concerned that people will drift into highly residential spots nearby to sit and eat etc. in the middle of the night.  Even if these premises agreed to close at 12.30am, or any time after the pubs close, it could still cause the same problems.  In our view they need to close, at the latest, no later than the same ‘Framework Hours’ that most pubs have.

You will need to form your own view on the application.  If you are concerned, either because of the impact in the immediate vicinity or on the wider area, then you need to object by making a ‘Representation’ before the deadline of Midnight on 09/08/21.  This is done via Camden’s Licensing Register here.  (Instructions: insert application number APP\PREMISES-NEW\105813 in the search bar then, at the top of the list, click on the application number.  This opens the application’s page, with the details and documents.  At the bottom there is a link to ‘Make a representation form’.  This takes you to a form which asks your reasons for objecting.  You can write directly into the form or add an attachment to it.  We recommend preparing your Representation as a text document and then adding it as an attachment.  This preserves formatting and so makes it easier to read and refer to at hearings.)

The CGCA is considering objecting to the application but being prepared to withdraw if the hours for Late Night Refreshment are amended to the same hours as McDonald’s, which are Camden’s ‘Framework Hours’.  We plan to object to recorded music, too, because we assume they intend to have only background music and this does not require a licence.  We will also be asking for a number of additional conditions on any licence that they are granted – related to servicing, noise escape, security and litter collection in the vicinity.  However, if you have a different view please let us know.

If you have any questions please contact the CGCA’s Licensing Sub-Committee at licensing@coventgarden.org.uk.

* Subject to the outcome of Camden’s hearing in August.